2010 has been a very busy year, lots of traveling, lots of painting, lots of shows, and what better a way to end the year with a couple more group shows to end a brilliant year. THANK YOU 2010.

‘NEVER JUDGE’ group show in association with Penguin Books @ STOLEN SPACE GALLERY Dec 3rd-23rd
The first show that is coming up is the ‘NEVER JUDGE’ group show in association with Penguin Books at STOLEN SPACE. The Show will be running form 3rd December through til  the 23rd. The brief for the show was to create a piece (in almost any media) the size of a penguin book cover based on a book that has some kind of relevance. I have taken the opportunity to do a slightly different kind of piece. Expect at least 80 artists taking part, with the usual line up of the gallery artists as well as a very impressive list of others…Come to the show @ STOLEN SPACE GALLERY or watch this space for more. More details of the show can be found here… 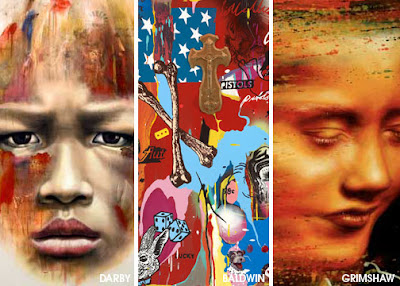 ‘TRUE BRITS‘ 3 man show with Dan Baldwin, Dale Grimshaw & myself @ BLACKBOOK GALLERY, Denver, Colorado. Dec 4th-23rd
I have been invited to take part in a 3 man show alongside Dan Baldwin and Dale Grimshaw in a fairly new gallery in Denver, Colorado. The Gallery, formerly known as Andenken, is now THE BLACKBOOK GALLERY. The show, “TRUE BRITS”, will be held from December 4th through til the end of December. watch this space for more images of work plus work in situ. More details of the show can be found here…

JONATHAN DARBY SOLO SHOW @ SIGNAL GALLERY, March 2011Finally, I will begin to be working on my second London Solo Show which will be held in SIGNAL GALLERYin march, 2011. Lots of ideas swirling, very excited at the prospects of new work…WATCH THIS SPACE FOR MORE DETAILS….

Finally, Finally, I have finally had some spare time to rebuild my website which is scheduled to go online before the end of December…Its looking nice and smart….COMING SOOOOOOON